The Penultimate day of the trip and our last day with the bikes. This is the first time in ages that I had spent so much time on a bike in a week and covered so many miles. As a family, we usually take our bikes to Centre Parcs when we go but this isn't the same sort of distances that we covered this week and I was sad that this was the last day of my bike. I will try and get mine out on a more regular basis but the 17-mile commute over the south downs is probably a step too far each day!

This was also the last day for our students to create their escape room. They spent the morning beavering away creating their themes and puzzles for the rooms that were going to be tried out that evening by the Dutch students' parents. I was really impressed with how well they all come together during the day and after lunch, they were all making lists of the things they'd need to bring from home or pick up in order to complete their rooms.

The students were given the freedom to go early and get these materials if everything else was completed and this was another example of the trust given to the students to complete the task without following strict rules about times in and out of school.

I also had a chance to sit in on another Maths lesson. A younger group this time but again looking at linear equations and a recap of what we would call order of operation questions or BIDMAS. Interestingly the Dutch used a staircase approach but it all amounts to the same. The linear equations were interesting as they didn't use the same notation and it got me thinking, why do we use the letter m for gradient? Having taught maths for 6 years you'd think this wasn't the first time I'd thought about it but it was. So a quick Google search gave me no conclusive answer. It would appear that there is some people suggesting it comes from French monte meaning slope and others for modulus of slope but neither seemed totally conclusive from the small part of research that I was doing so when I spoke to the teacher about the difference in notation we both agreed that we liked the c for the constant but the 'm' was a mystery! The group of students was happy for me to answer their questions but they were a little nervous about asking me the question in the first place.

After school and the final bike ride to return the bike was slightly emotional. This was starting to signal the end of the trip and I had had such a lovely time that returning the bike was the first sign of the end approaching. The week so far had seemed to fly by but also felt far longer than a week. I returned the bike in mostly the same number of pieces to its rightful owner who kindly took us off to see some Dutch tulips in the fields and also a quick pit stop to pick up some Dutch created waterbottles. It was really kind of her to do this for us and this echoed the amazing hospitality that we had received all week.

Back at school for the final revealing of the Escape rooms and the parent's had also prepared some traditional Dutch food too. I was really impressed and proud of the student's work. I thought that one of them may have been too mathematical to complete in the time available but the parents got stuck in and tried them all out. We all knew it was a great success when one group of parents let out a great big cheer when they had completed the room. Definitely a successful activity and week for the students. Great credit to the teachers that came up with the idea! The Dutch food was delicious but not quite enough for everyone as a dinner which left us going back into the town centre for another lovely dinner with some of the staff. 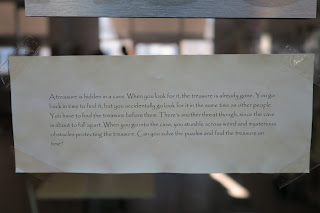 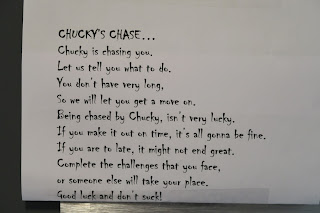 After dinner meant some goodbyes as we were all going our seperate ways the following morning with us leaving last the others had a fairly early start to their journey's home. The week was a fantastic experience and I have made some more friends in schools in other countries.